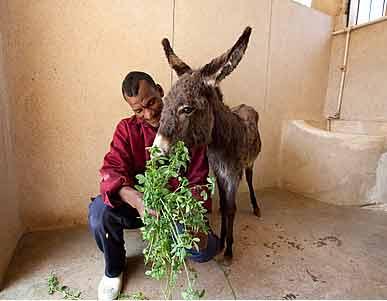 As tourists and citizens we have in our hands the power to protect animals in one more way: by knowing that our wastes, and the garbage we leave behind us after a day at the beach, can cost the life of many animals and make their habitat a place full of dangers.

According to the UN there are about 18,000 plastic debris floating on every square kilometre of salt water. It is estimated that 80% of marine plastic debris come from land, and that the remaining 20% is thrown from boats.

Between 60% and 80% of all waste of the planet -6.4 million tonnes a year, which end up in seas and rivers -are made of plastic. Even more in areas such as Eastern Indonesia, a highly populated zone, where plastic trash covers up to 90% of the coast and the beach.

If the North Pacific has the highest concentration of floating plastic in the world, the largest planting of plastic waste can be found under the Mediterranean Sea, between the coasts of Spain, France and Italy. After the Mediterranean, the most polluted seas are the Caribbean (600 pieces of plastic per square kilometre), the Indonesia seas (about 580 pieces) and the Irish Sea, with 230.

A single plastic bag takes 150 years to start decomposing. Some may remain intact for four centuries. Below you can see how long our wastes may remain on the beach and for how many years they will represent a danger:

Estimated time of degradation of objects commonly thrown on the beach:

1-2 years: Under the rays of the sun, a cigarette filter can take up to two years to disappear. If it falls into the water, the decay is faster, but more polluting.

10 years: That's how long it takes for a can of soda or beer to turn into iron oxide.

100 years: Disposable lighters, made or steel or plastic, take time to transform into something else. Steel, exposed to the air, starts to change after 10 long years.

100-1000 years: Plastic bottles are the most “rebels” when it comes to decomposing. They may end up fragmented and dispersed and, if buried, last way longer.

150 years: When it comes to plastic bags, Mother Nature has to fight a really long battle….

1000 years: The polypropylene cups contaminate less than the polystyrene ones. But it takes a long time for both of them to decompose.

4000 years: Glass bottle, in whatever form, is a very resistant object.

Many animals suffer and die because of our wastes. In some cases the plastic scraps go trough the animals’ intestines without doing much damage. But in many other occasions they are lethal: the pieces of trash clog the animal’s throat or digestive tract causing death for starvation or malnutrition. The waste can accumulate in the stomach giving a false sense of satiety. The animal stops eating and slowly dies of starvation.

75% of the loggerhead turtles that died in the Mediterranean and could be analysed, contained PVC remains in their stomachs. And they are not the only ones. 60.5% of the turtles in southern Brazil and 56% of the Florida ones had ingested this type of garbage. Turtles mistake plastics for jellyfish which are part of their diet.

Dolphins are the most affected by plastic wastes thrown overboard. It is increasingly common to see them dying on the beach choked on plastic bags. On the coast of Spain it might happen to see cetaceans dying on the beach, many of them with their stomachs full of PVC bottles, cans and even pieces of toys.

Another example of all the damage they can cause occurred on the French coast in 2004. That summer a sperm whale was found dead after swallowing a plastic box that had plugged his digestive system. On the box, the name of a Spanish supermarket.

Many seabirds ingest plastic in a selective way, depending on the colour. Many of them drown. And the drama increases when they feed their babies with plastic plugs, for example. Those who do not suffocate lose weight gradually and do not grow in a normal way.

Not even the felines can escape. Too often tourists throw garbage into rivers causing, for example, these animals to stop eating because of the plastic bags in their throat. Turtles, seals, penguins and snakes are particularly affected by the pollution coming from the water.

Unfortunately, very few citizens and tourists are aware of the damage they can cause. When it comes to the use of plastic bags, Spain is the fourth country in the EU, behind Germany, France and Italy: 10.500 million a year, 238 per person. And only a 10% of these bags are recycled, with an incalculable ecological cost.

It is very important to try to reduce the consumption of plastic bags and replace them with biodegradable ones. We should also get used to reuse containers, reject products involved in unnecessary plastic packaging and, above all, always collect the wastes that we find on the beach or in any natural environments.

The documentary "Midway" exposes the terrible effects that our waste can have on the lives of animals: https://vimeo.com/25563376