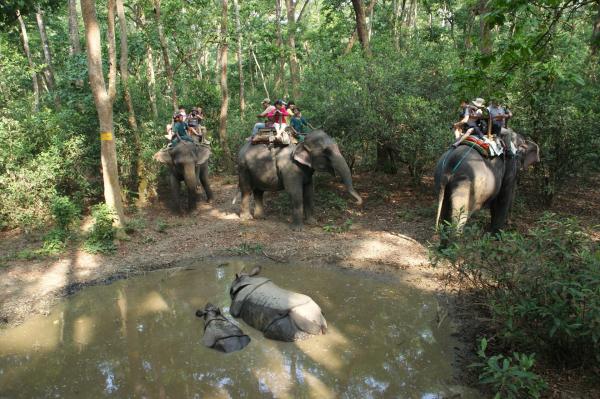 Elephant rides have an understandable appeal - they offer a unique opportunity to get close to the world's largest land animal. More and more elephants are being captured from the wild for these tourist activities, so far mainly carried out in Asia but which have now spread to Africa, too. Many of them are captured at an early age, usually after killing their mothers, and trained for years through brutally harsh methods. We have to be aware of the cruelty behind these activities in order to make an educated decision.

The limited lifespan of elephants in captivity contrasts sharply with that of those who live in the wild, where they usually roam distances of 30 miles a day and establish strong links between them that last a lifetime. Because of the unnatural living conditions, captive elephants often suffer from debilitating foot conditions, arthritis and other ailments.

Contrary to what it might seem, elephants are not designed to withstand heavy loads on their backs, in fact any load over 150 kg is an immense pressure on their columns. The wooden or iron chairs that are commonly used for elephant rides are already quite heavy and the crude harnessing methods, usually using thick ropes, often cause them painful sores.

Many companies offering elephant trekking overwork their animals. They neither provide enough rest, enrich their lives nor do they allow them to perform natural behaviors or drop their heavy chains. Healthy elephants move constantly, flap their ears to cool off and chase off flies with their tail. An elephant that does not move is usually sick.
Elephants that spend hours chained and cannot move freely, show stereotypic behaviors such as rocking from side to side, front to back and sometimes moving their legs in a distressing way. These movements indicate stress, boredom and lack of enriched environment.

To control these huge animals and make them submissive, they are usually deprived of food and water, are isolated from other elephants, chained, sleep deprived and stabbed with sticks that have sharp nails attached to them on sensitive areas such as their ears and eyes.

The pajaan is a centuries old Thai "training" (or "domestication" method) which unfortunately forms part of the Thai culture.

The purpose of this training is to "break the spirit" of the animals, to make them submissive and render them totally incapable of ever disobeying the orders of humans. This is achieved by separating baby elephants from their mothers (which alone is extremely traumatic), then placing them in small cages where they are tied so they can not move. The elephant is then beaten and stabbed repeatedly with sticks that have sharp nails attached to them. The beating goes on for several days.

The more the elephant struggles, the more severely it is beaten. As you know, elephants never forget so after the pajaan these giant creatures will forever be fearful of humans and always do what they’re told.

In just 12 years in the Indian state of Kerala, some 1,000 elephants have died during their "training".

There is irrefutable graphical evidence of this process, as this video from National Geographic (Training Crush) and the photo report of the Magazine.

Metal hooks are generally used to dominate the elephants, and they are often used in an abusive and aggressive way. We often see injuries to the head of animals and behind his ears, showing that they have been mistreated.

Elephants need to eat for 14-18 hours a day (herbs, bamboo or forage) and drink up to 100 liters of fresh water. They must also be provided with shade during the hottest hours of the day.

Accidents and other risks

Some young elephants are forcibly separated from their family herds in the wild at a very early age using weapons and sometimes helicopters. Capturing young animals from the wild, separating them from their herd and subjecting them to abusive treatment causes psychological harm to them and is very stressful. Combined with the frustration of their instincts when living in captivity, they become unpredictable.

In response to abuse, or because of an incident that frightens or provokes them, elephants can react furiously. Due to their size, even a small misstep can be fatal. And elephants are well known for their prodigious memory, so it's quite common that they rebel against their handlers and attack them. There is a long history of accidents involving elephant rides, some of which you can find here and in this article.

Contact with elephants also poses health risks such as a possible spread of disease. Elephants can carry dangerous diseases and transmit them to people. For example the spread of tuberculosis is quite common.

Elephants are not amusement park rides. They are wild animals weighing thousands of pounds. These elephant rides do not teach us anything about the lives of these magnificent animals in the wild.

Fortunately, there are also associations that protect and, where possible, rescue these animals. In this link you can read about the case of an elephant rescued by Wildlife SOS India from being used in elephant rides, among other activities, and who suffered a severe limp due to a car accident left untreated for years .