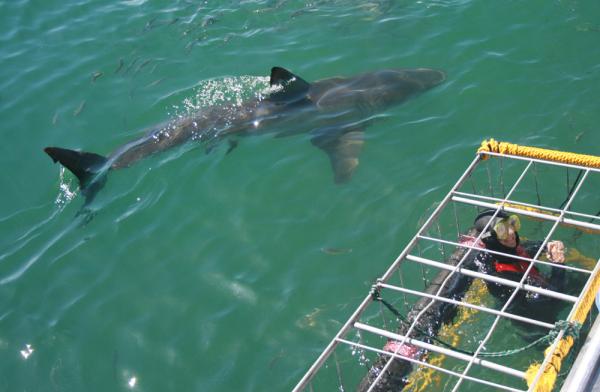 There is an increasing trend among adrenaline junkies and wildlife enthusiasts to swim with the ultimate predator. But is cage diving with sharks an ethical way to see one of the world’s protected species?

Cage diving with sharks entails being locked inside a metal cage while being lowered in the water to meet face-to-face with a shark, usually a great white. The sharks are enticed with “chum”, a soup of blood, mashed pilchard, and sardines which are thrown overboard to attract them.

Cage diving with sharks has raised several concerns. The most important of them is to feed a wild animal can cause problems, as this may influence their behavior and disrupt the natural balance. In Florida they believe feeding sharks alters their natural behavior, and a ban was put in place in November 2001. Since then it has been illegal to feed sharks in the wild.

Links have also been made between feeding sharks / cage diving and an increase of shark attacks on humans. Campaigners are concerned that “chumming” conditions the sharks to get closer to the beach. Cape Town's Shark Concern Group says: "It is not a good idea for humans to taunt an apex predator by throwing food and blood into the water. It is no surprise that human interaction is leading to more attacks."

The scientific community also feels it is an unnecessary activity of which the ecological implications are largely unknown. Some people argue that the practice shows no respect for these endangered species.

On their part, diving operators say chumming only attracts sharks that are already in the area. They also add that shark diving has a vital role to play in re-educating the public and protecting the great white.

Thus, the controversy is served.

Some diving-with-sharks-trips are used to carry out research on shark behavior and sexing the animals, others are mainly for the entertainment of tourists, although they often claim to play an educational role.

There are things operators can do to minimize detrimental effects, such as limiting the number of people diving in one location, preferably outside a large radius from the coast and other areas frequented by people, and providing lessons in shark biology for diving representatives. Sharks should also ideally be allowed to approach the cages without enticement with chum.