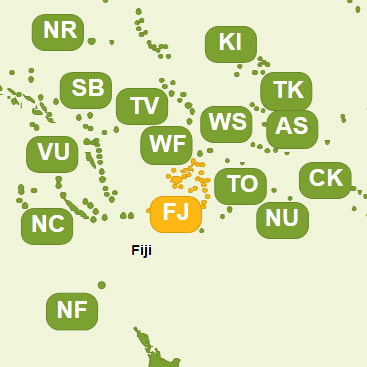 Fiji has six national parks of exceptional natural beauty that offer tourists the opportunity to explore the tropical flora and fauna of the islands. Some of these have got rid of logging and the negative effects of the introduction of invasive mongooses.

The Kula Eco Park is the only captive breeding center for endangered wildlife in Fiji. Open to the public, it exhibits reptiles, exotic birds, tropical fish and hawksbill sea turtles. Although its purpose is to conserve and breed endangered native animals and re-introduce them into their natural environment, this center allows and encourages visitors to handle and take pictures with some of the animals, especially the rare iguanas, as well as feed Hawksbill turtles. This activity is potentially stressful for animals and excessive contact with humans can impede their ability to survive in the wild. While this park clearly has good intentions, it needs to improve on these issues.

Known as the "soft coral capital of the world”, Fiji attracts divers to observe its diverse and spectacular coral reefs throughout the year. The ocean surrounding Fiji is home to more than 1,200 species of fish and a variety of marine life, including sea snakes, moray eels, sharks and turtles.

Sea turtles are beautiful to watch underwater, but they are endangered. Divers must keep their distance from turtles, as touching them can spread deadly bacteria and hinder the attempts to recover their population. Overfishing, increasing tourist numbers and other human activities are also endangering Fiji's coral reefs. To preserve the oceanic ecosystems of Fiji, you should not step on or touch coral or marine life and you should denounce any type of fishing or illegal dumping and support local organizations that protect coral reefs.

Fish feeding during diving excursions is becoming increasingly popular despite the potentially damaging effect this may have on marine life. Feeding the fish can cause changes in their behaviour patterns and alter the natural processes vital to the marine community. As aggressive behaviour is increasing in some species of fish, they tend to swarm around divers or swimmers and even bite them. The feeding of fish that eat algae can make them stop doing it and alter their role in the maintenance and growth of coral.

One of Fiji's biggest current challenges is the increasing amount of garbage that is damaging the environment and wildlife. Sea turtles can accidentally swallow plastic bags they find in their way and drown to death. When batteries disintegrate, they leech harmful chemicals that destroy corals and other marine species. Tourists should dispose of garbage responsibly, by recycling or taking it to corresponding facilities. Special precaution should be taken with garbage on beaches and boats, to prevent it from ending up at sea.

Other possible problems to have in mind:

Here is a list of local NGOs that can be contacted in case you want to make a donation, a complaint or find an animal that needs help in Fiji: