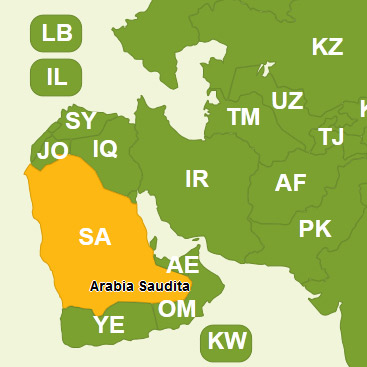 There is a large illegal trade of houbara bustards, hunted in Pakistan, Iran and Afghanistan and exported to Saudi Arabia and other countries in the Middle East where they are used by falconers to train their falcons.

Other parts of endangered animals are often illegally brought into the country without any complications.

In several locations in the country, such as in the city of Jeddah, you can find exotic animal markets that sell, among other animals, small primates, reptiles and exotic birds of different species, as well as big cat cubs (and even fighting dogs!). We remind that the trade of these animals is usually illegal, that many of them have been captured from the wild and are kept in deplorable conditions and often mutilated so that they cannot harm people. Even with the best intentions it is impossible to provide decent living conditions and care that these animals need in captivity.

In this country you can also find centers which keep cetaceans (dolphins, killer whales or beluga whales) in captivity. Science has shown that these intelligent animals suffer greatly in the limiting conditions of dolphinariums and their stress levels and mortality rates are very high.

The training of these animals for circus shows where they perform totally unnatural behaviors, and which can harm them physically, is achieved through keeping the animals in a permanent state of hunger so that they act in exchange for a piece of dead fish.

Condemned by their facial structure, which resembles a human smile, these highly social animals, which would swim long distances and dive into great depths in the wild, are used to perform stunts in small concrete tanks. Many of the animals are taken from the wild.

Here is a list of local NGOs that can be contacted in case you want to make a donation, a complaint or find an animal that needs help in Saudi Arabia: