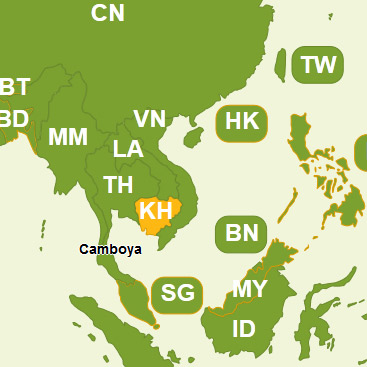 Cambodia is home to a great variety of wildlife. Birdwatchers flock to Cambodia to see two of the rarest birds in the world – the giant ibis and its “cousin” the white-shouldered ibis.

Products of Animal Origin and the Law

Cambodia is one of the main countries in terms of illegal trafficking of endangered animals. The massive demand of animal parts to supply the traditional Asian medicine market, sales of live exotic animals, meat and skins are rapidly bringing many native species to extinction. There are approximately 3200 wild tigers left in the world, protected by CITES. In Cambodia there are about 20 Indochinese tigers which are threatened by poaching for Thai tiger farms, as well as the degradation of their natural habitat. Less known is the rare Malayan (or Sunda) pangolin, an animal in critical danger of extinction, which is illegally hunted for its meat and its use for traditional medicine sold locally and exported to Vietnam and China.

In this country you can also find exotic souvenirs made from different animal parts or even live animals. The purchase of these souvenirs is totally inadvisable since they might have been obtained through animal cruelty and their sale may even be illegal. If we do not know if a product comes from a threatened species or is the result of animal abuse, it is better to opt for alternatives that do not contain shells, horns, skins, feathers, teeth, bones and other animal products.

The slow lorises and long-tailed macaques are often captured from the wild while young and forced to spend entire days tied and dressed up so that tourists could take photos with them. In addition to the stress of capture, these animals suffer from continuous contact with people and are usually drugged or mutilated (having their claws and fangs removed), which leads to them suffering from infections and having chronic health problems and the inability to be reintroduced into the wild. Moreover, these captures have a serious effect on the conservation of these species, since often to capture a single individual it is necessary to kill several members of their family group. It is very important to never pay to take photos with these animals.

Elephant riding is a very popular tourist activity, especially around Angkor Wat. Unfortunately, the training techniques that these animals endure are extremely cruel, they spend long hours tied and having to carry the weight of tourists is harmful for their delicate feet and back. In addition, many of these animals are captured from the wild and this has led to the Asian elephant being one of the most threatened animals on our planet. In short, elephant rides are one of the most controversial and harmful tourist activities with animals and tourists should never pay for that.

More information about the topic here

Years of war and unsustainable agriculture have reduced Cambodia's forest cover, which still maintains one of the largest proportions of forest cover in the region. One of the especially threatened areas are the Eastern Plains, which are home to a variety of wildlife, including tigers, crocodiles, civets and exotic birds. One way to help protect this habitat is to make sure you buy fair trade timber to end the demand for illegal, unregulated timber.

Kittens for begging from tourists

In the streets of some localities of Cambodia you can see people who use kittens to ask for money from tourists. These animals are kept in terrible conditions, malnourished and constantly tied. It is very important not to financially support this type of business and help the animals by denouncing what you have seen to local animal protection organizations.

According to local organizations, a large number of bears are hunted in Cambodia every year, and their parts are sold throughout Asia to restaurants, for traditional medicine or their offspring is sold in the exotic animal market.

Like in many Asian countries, horses and donkeys are also used as pack animals in Cambodia and whole families depend on their work.

The animals often become ill due to lack of adequate food and drinking water, as the owners simply cannot provide them with this luxury, and the specifics of the terrain and climate create a difficult environment for them.

These working horses play an important role in agricultural and transport tasks, but economic difficulties often force their owners to overexploit them, and among other things to use them in tourist activities.

More information about the topic

Here is a list of local NGOs that can be contacted in case you want to make a donation, a complaint or find an animal that needs help in Cambodia: